Charlton is a new build modern nursery but even so the acoustics had been overlooked and so Woolly Shepherd were called in to investigate the issue. Although the rooms weren’t large they had various angled reflective surfaces that when combined with the noise created by young children playing created a terrible acoustic. The issue also had a knock on effect with several children wearing hearing aids or having different levels of hearing loss finding the noise levels extremely disturbing.

Clouds are always a favourite of schools, nurseries and as you would expect, the children themselves. After an acoustic survey was carried out the specific number of clouds and layout was calculated.

The end result was a useable space for all the children and staff.

“Across the board the children have benefitted and the staff and practitioners because the noise levels have been reduced. So there is a calm that pervades around the room because, you know, noise levels, actually like anything are irritating to people. You want peace and you want calm and that’s when you get the best outcomes for children and for practitioners.

We rebranded the business about two years ago and as part of that rebranding we called Elizabeth Jarman (https://elizabethjarman.com). She talked about the best learning environments for children and it’s essentially soft, muted colours, natural materials, no red no jarring, it’s kind, it’s warm and that’s the best environment. So the clouds totally fit with that kind of ethos. The colours, materials and even the shape totally fits with the environment we look to create.

For us as a business it has been a no-brainer in that socially, with our social conscience we want to be able to help these children, actually the end result has been that the reputation the nursery has been enhanced by the fact that we have invested in this. The net result has been that we have thenbrjought more children in from more settings. So the clouds have more than paid for themselves and it’s a win win situation for us.” 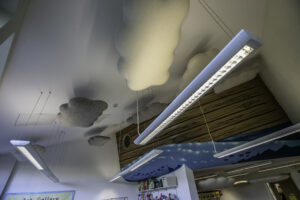 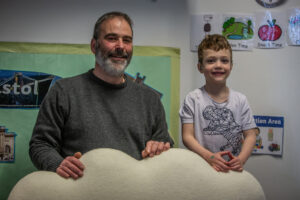 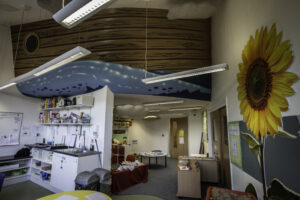 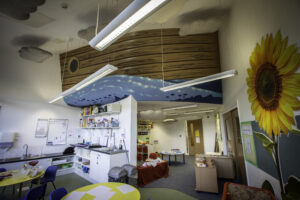 Woolly Shepherd were called in to survey two large assembly and sport halls at Two Mile Hill Primary School. The spaces had very high ceilings with pitched sides being part of an old Victorian school building.

The challenge for the design team at Woolly Shepherd was to reduce the reverberation in these large rooms while making it attractive to the children using the spaces.

The solution was to supply a considerable number of our Acoustic Sound Clouds and decorating the ceilings in a beautiful blue to compliment the clouds.

The end result as you can see from the photographs was not only stunning but incredibly effective!

Teachers using the spaces said the children and adults, especially the ones who were hard of hearing, could now hold normal conversations without shouting. 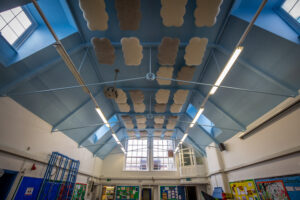 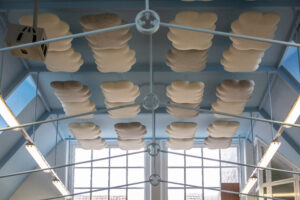 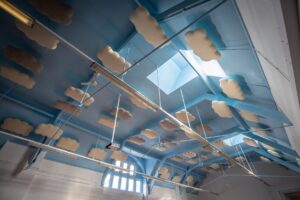 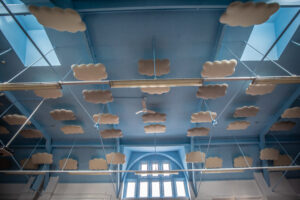