The Woolly Shepherd was started with the aim of utilizing what was then waste wool from the Blackdown Hills and the surrounding areas. Wool prices were low and farmers were burning fleeces because disposal was expensive and they were unable to cover the cost of shearing.

In the Spring of 2011 the Wooly Shepherd was purchased from the original owner and the new owners manufactured and sold insulating meat box liners to Riverford Organic Farmers and a number of other smaller operations.

In the first year of its new ownership the company investigated a number of other uses for its wool felts and at various times sold wool insoles, wine bottle jackets, mobile phone covers and pouffes.

During this first year of new product development, the company hit upon the idea of using wool to absorb sound waves and the idea of a fluffy wool cloud was born. 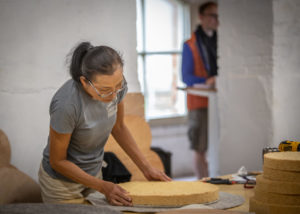 In March 2012 the company was invited to appear on the hugely popular BBC Countryfile and took part in a mock Dragons Den presentation to Deborah Meaden and Ellie Harrison, where Deborah identified our acoustic clouds as the product that she felt would take the company forward.

Not that surprisingly, Deborah was correct and we now focus entirely on room acoustics, manufacturing clouds and a number of other wool acoustic absorbers along with an orchestra shield and office screening.

Keeping true to the company’s earliest roots, we still collect fleeces from farmers and smallholders across the South West of England and where addition wool is required, we only buy 100% UK grown wool.